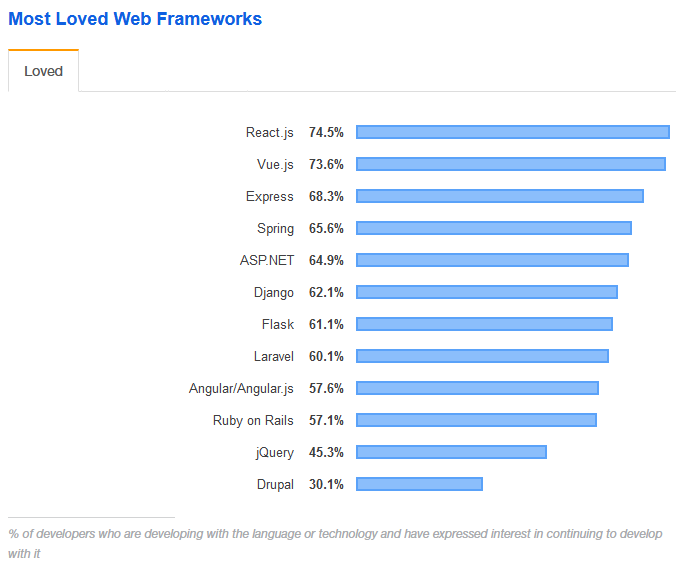 In addition to being flexible and nimble, React.js is highly performant. React JS is built on top of HTML and JavaScript, both of which are considered modern technologies. Moreover, React JS allows for reusable codes. It also leverages downward data flow, so that changes made in the child structure do not affect the parent structure.

React is a popular framework for building web applications. The library allows developers to create a variety of types of apps and maintain them easily. This framework is especially suitable for large-scale projects with complex user interfaces. It also supports progressive web applications. In addition to this, React is extremely easy to learn, with only a minimal learning curve. Developers with a basic knowledge of HTML, JavaScript, or another programming language can easily learn the language and develop apps with ease.

Another advantage of React is its ability to provide reusable components. The React library comes with a JSX syntax extension that makes it easier for developers to write custom components. Using this technology can lead to increased productivity when developing web applications. Furthermore, the framework also supports high-volume applications with frequent updates, which can be a hassle with some frameworks.

Developers will appreciate the fact that the framework supports multiple languages, including JavaScript, TypeScript, and JSX. As a result, React development can be streamlined, and developers can begin with a few components and add more as needed. The library also includes many useful developer tools, which can be installed via browser extensions.

React is a popular choice for developing web applications. It has a low learning curve and allows developers to build highly scalable and customizable applications with ease. Its robust ecosystem includes reusable components and companion libraries. Its features include Virtual DOMs and impressive state management. It is also extremely easy to test and maintain web applications with React.

React allows for integration with various third-party libraries and MVC frameworks, allowing developers to easily make changes. This allows developers to create web apps from scratch or gradually integrate it with an existing codebase. It is also SEO-friendly, which makes it an excellent choice for companies seeking to build cross-platform applications.

React and Angular are two popular frameworks for building modern web applications. Although both frameworks have similar features, they have some key differences. For instance, React is more lightweight and can handle large datasets. Additionally, it supports server-side rendering. This means that it can be used to build large enterprise applications. Whether to use React or Angular depends on your project requirements and team size.

React is cross-browser-compatible, supporting SVG, WebGL, and Canvas. This makes it a great choice for developing applications that use complex user interfaces and presentation components. React also offers superior performance when compared to other javascript libraries.

React is easy to use. It has hundreds of libraries for building UI components. This eliminates the need for teams to reinvent the wheel when developing complex high-load web applications. Moreover, React’s powerful virtual DOM technology makes it easy to create applications with less code.

React is a powerful and fast-growing web development framework. Facebook, one of the biggest social media platforms, is a heavy user of the library. They use over 50k React components in production. Furthermore, the top four React contributors on GitHub are full-time employees at Facebook. For each new release of React, the React team publishes a blog that provides more information about the latest version. They also provide a command-line tool known as Codemod that automates breaking changes. It replaces older components with new ones according to the new specification.

React is very easy to learn. Its simple programming model makes it possible to update state whenever data is updated. React also has a smaller library size than most other frameworks. Its small size also makes it easy to test your application. While traditional UI browser testing requires browsers, React component testing is a breeze and doesn’t require any additional effort.

React is an excellent tool for building scalable web apps. It works by rendering HTML and updating the state of an application. It doesn’t have any restrictions on the types of apps it can be used for, so developers can use it for all sorts of web apps. But as with any language, developers need to be careful and learn React well in order to achieve the maximum benefits.

React has a modular architecture that makes it easy to integrate it into various projects. This means that you can scale any application. You can add React to your tech stack at any time, but it’s best to consider it from the beginning. In addition, React is fully backwards compatible, which means you can use different library releases in your projects and update them when needed.

A web application may need to scale to accommodate a higher rate of requests, more data volume, or a larger transaction throughput. There are two ways to scale a web application: scaling up and scaling out. The first method involves strengthening the hardware; the second method requires design changes.

While react is a popular UI layer, there are no clear best practices for state management. Currently, Redux is the most popular central state management solution, but it’s verbose and has a steep learning curve. With the help of the react-umi-dva stack, developers can build scalable web apps faster and more cleanly. Ant Design for React provides a library of high-quality components for building web apps and making them scale.

ReactJS is a popular technology that helps companies develop scalable web apps. It’s a powerful framework that allows big businesses to excel in a rapidly changing market. React is a modern library and comes with a wide variety of developer tools. It can be used to build complicated web applications, Progressive Web Applications, and large-scale projects.

React.js is a modern, fast-moving framework that provides a dynamic UI and an event system. It uses a virtual DOM, which makes integration with other applications much simpler. Additionally, it supports Declarative views, which make the code more readable and debuggable. It also supports the W3C object model, and provides a cross-browser interface to native event systems.

When developing React apps, it is important to test the different components of the app. This can be achieved with a test runner, which runs the tests continuously. Using this framework, you can also run the tests as part of your application development lifecycle. If you pass the tests, your latest version of the application can be deployed.

Another important benefit of React is its robust community. A large developer community can help with any issues that arise. Even if you are an experienced developer, you can get help from the community. The extended developer network makes troubleshooting a problem much easier. React also supports React Native, a cross-platform mobile development framework.

While implementing React, remember to keep the code as simple as possible. This will ensure that you don’t duplicate code. This is especially important if you’re working on a high-load application. This can slow down the production process. If you have a lot of duplicate code, you might need to rewrite some of the code. Using the right framework can make this process much simpler.

React is an open source JavaScript library used for front-end development. Its component-based nature allows developers to create interactive user interface components that are compatible across platforms. As a result, it’s easy to build high-performance web applications using React. Its popularity is evidenced by the fact that it is used by some of the world’s biggest companies.

React is a lightweight library with a huge number of advantages. It is ideal for building modern web apps, as it allows for super-fast development and removes the need for bootstrapping libraries and frameworks. Its fast rendering capabilities and support for Virtual DOM help improve the speed of modern web apps.

React is a lightweight framework built on JavaScript standards. This makes it easy to add and remove code anywhere on a website without shutting down systems. It is also extensible and integrates well with other frameworks, making it a versatile and powerful choice.

React is becoming increasingly popular. It is the leading language for building web applications and is also being used by developers developing native mobile applications. Some of the biggest names in the world use React Native. Netflix, for example, uses React Native for building its video streaming app.

React allows developers to use reusable components for a unified front-end development approach. In addition to enabling faster page load times, it is also a reliable tool for building machine-readable code. Facebook, Twitter, and Instagram are just a few of the companies using React.

The React library is a versatile JavaScript framework that lets developers create components. These reusable units of code can be reused throughout the app. It helps developers build a UI with small reusable parts, making code easier to understand and maintain. Bosch Dishwasher Error Code E24 – How to Fix It Yourself How to Fix Roblox Crashing How to Install Paramount Plus on Samsung TV